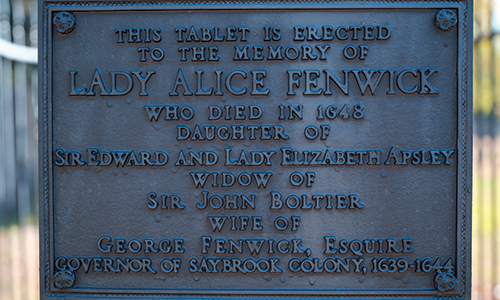 One May morning in 1638, a ship slipped down the Thames River in England bound across the Atlantic Ocean. The doughty craft’s destination was the Connecticut River. Deep in her hold were boxes and barrels packed with seeds, cuttings, and saplings. The cargo comprised a formal English garden to be transplanted where only a short time prior the blood of English colonists and their indigenous enemies seeped into loamy Connecticut soil. Below decks, in a cramped cabin shared with her husband and infant son, an extraordinary free-spirit who was to become “the most magical and mysterious woman in Connecticut River history” planned her plantings and battled mal de mer.

Her name was Alice Fenwick. A previous marriage to an English peer, Sir John Botelor, who died shortly after their wedding, allowed her to add “Lady” to her name. Her current husband, George Fenwick was of aristocratic, but not noble, blood. He was a lawyer turned adventurer who set forth from England to take command of the fort where the “Long Tidal River” debouches into Long Island Sound. Since the Dutch were banished from the river and the fierce Pequot interlopers were vanquished, his charge was to establish a safe haven for the anti-Monarchists fomenting political and religious turmoil in England. 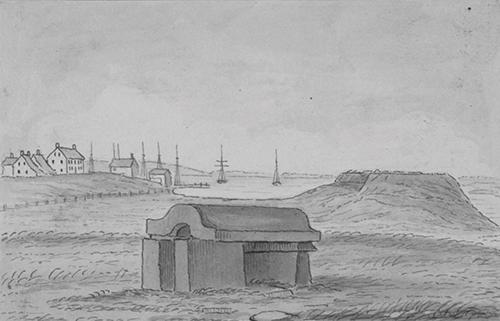 Lady Fenwick was determined to literally put down roots in this wild, new land. Her goal was to replant her familiar flowers, fruits, and herbs and to learn the nutritional and healing properties of the botanicals that River Indians cultivated for thousands of years. For Lady Alice, plants were sources of life that not only fed bodies, but also fed spirits with their beauty. They could heal and prevent illness, and stave off melancholia. She brought a powerful pharmacopeia to the Connecticut Colony along with a willingness to seek knowledge from its original inhabitants. She was not prejudiced against the local population, and they responded by sharing their plant lore and culture along with a deep sense of friendship and respect.

Her husband designed the colony’s seal and penned its motto “Qui Transtulit Sustinet,” the transplanted shall sustain, in homage to her horticultural abilities. The seal, with its grape vines and Latin words, is still used almost 400 years later. But Lady Fenwick was more than a gifted gardener. She had skills that suited her pioneering persona. She was a crack shot and hunter; she could row or sail small boats with ease and skill; she sat a horse perfectly and sang madrigals almost always on key. Her contemporaries spoke of her kind and caring disposition and never failed to note her comeliness.

Alas, no images of Lady Alice survive. All that is left of her physical self is a lock of hair displayed at the Old Saybrook Historical Society. How they came to possess it is another numinous chapter in her legend. Sadly, Lady Fenwick died shortly after giving birth in 1645. Her distraught husband returned to England to fight against King Charles. He gave command of the Saybrook fort to Matthew Griswold, a lawyer and stone cutter. Griswold fashioned a tombstone out of Portland brownstone, and vowed that it would be cared for in perpetuity. His family still keeps that vow in the 21st century. 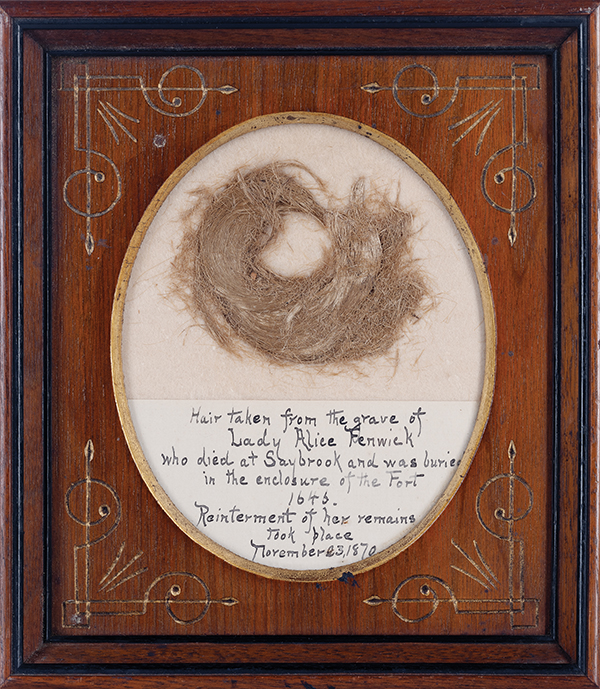 But Lady Alice did not always rest in peace. In 1870, the Valley Railroad built a warehouse on her burial site. She was exhumed. Her skeleton was in excellent condition as was her long, red hair. Her remains were displayed in a Saybrook home. It was a custom at the time to keep the hair of the deceased as momento mori. Alice’s locks began to disappear with the scissor snips of local women who whispered of her magical powers. Lady Fenwick was quickly reburied while she still had some tresses. Undeterred, women began to visit her stone and chip off pieces to capture a bit of her occult power. A wrought-iron fence was placed around her burial site to protect her monument. She rests at Cypress Hill Cemetery in Old Saybrook. A replica of her garden can be found at the local historical society.

Centuries after her brief time on the river, Lady Fenwick’s legacy is still felt in the surge of the spring freshet and the annual bloom of her beloved flowers. One local historian posits the idea that she was reincarnated as Katherine Hepburn, who lived in Lady Fenwick’s bailiwick and embodied her strength, spirt, and beauty. Both women left imprints of remarkable energy and power on the place they loved. Their magic can still be felt in the essence of the water that flows unendingly past their Old Saybrook home at the mouth of the Connecticut River.