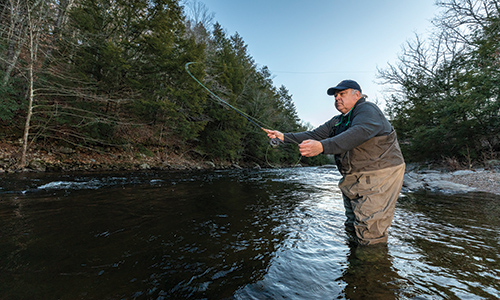 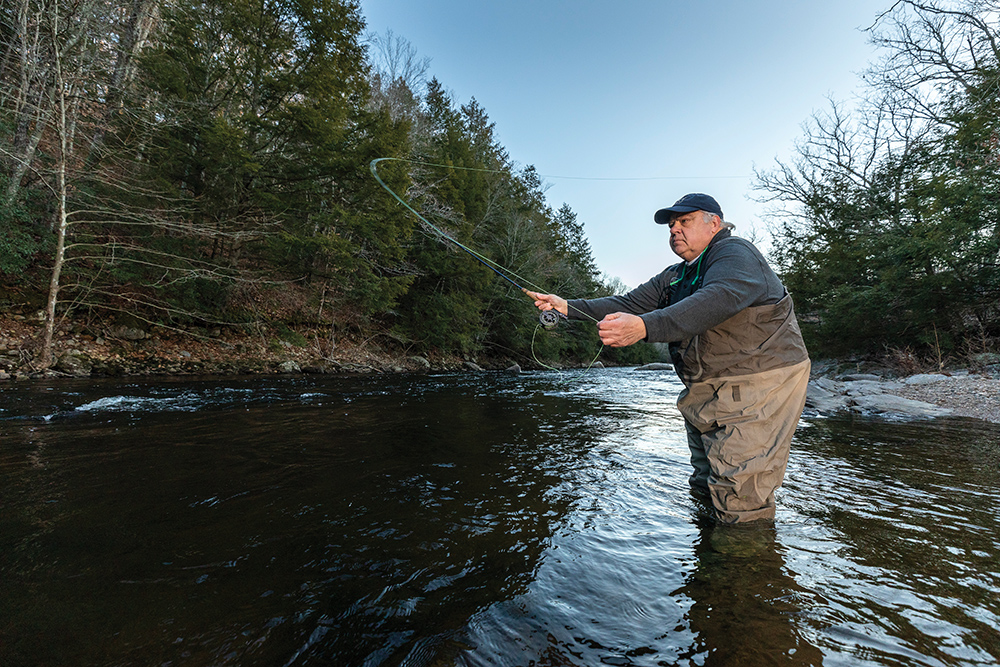 The first time I fished the Scantic River with my father, a great blue heron soared directly toward us through a gauntlet of sycamores, only yards away, his wingtips stretched seemingly from bank to bank. I can’t even remember how many fish I caught that day, but since then this small tributary of the Connecticut River has become my seventy-year-old father’s favorite stream. He likes to fish near the noisy waterfall in Hazardville, where he “can dream without distractions.” On just three occasions this past May he caught twelve trout and four bass, all on a simple Muddler Minnow, in an area “not much bigger than a living room.” One large bass pulled him into the water in a bout that left him shaken but excited, feeling like a much younger angler. 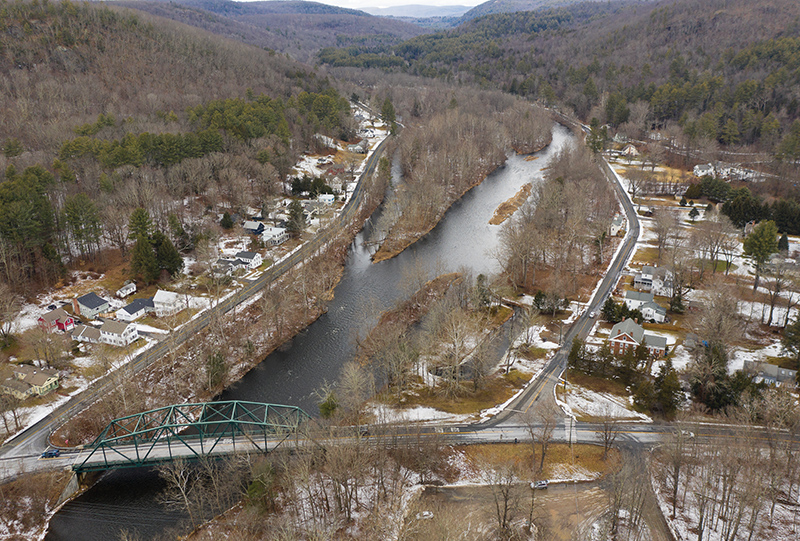 An aerial view of the Farmington River West Branch looking northeast above the Route 181 bridge and Church Pool area Route 181 in Barkhamsted, Connecticut.

The Scantic is not a perfect river—too hot in the late summer, and full of difficult-to-access, muddy stretches. But it is only one of dozens of unheralded streams amongst the 148 in the Connecticut River watershed, which is not as renowned as it should be for fly-fishing opportunities. One reason for this is that the watershed is spread out over four states, and so is not promoted in a focused way [Ed: a magazine like Estuary can help change that]. Another is the emphasis placed by New York-based writers on closer rivers like the Housatonic and Battenkill. A third reason is that during fly-fishing’s heyday in the 20th century, many areas were polluted by the heavy industries of Springfield and Hartford. But today these clean, free-flowing small rivers and streams make for some of the most exciting and satisfying fly-fishing in America. 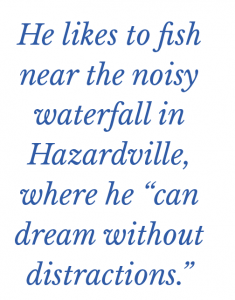 A few do have a healthy reputation already, including the eighty-mile Farmington River, blessed with rocky rapids and deep, safe pools. I have landed beautiful rainbow trout on the idyllic West Branch by the Peoples’ State Forest and in the boulder-strewn Crystal Rapids between Collinsville and Unionville. Unfortunately, the river is no secret, and on a sunny spring day, everyone from the Hartford metro area seems to be on or around the water. One chilly October day, I counted fourteen fishermen in a half-mile stretch by the Old Riverton Inn. Nevertheless, it is in many ways the perfect trout stream, consistently cold in the summer and warm in the winter due to the bottom-release dams upriver. Collinsville author of Deep Travel and Canoeing Maine’s Legendary Allagash, David K. Leff agrees. “Fishing the Farmington connects you to a river of stunning scenic beauty and ecological richness that has a long and storied relationship with humanity,” he says. “Few rivers offer so much, so close, to so many.”

The other tributaries in the state are lesser known, but the Salmon River from the confluence of the Blackledge and Jeremy Rivers to East Haddam is another masterpiece, with riffles and corners that seem to hide trout, and their salmon big brothers, at every turn. Fishing in the Trout Management Area under the covered bridge by Route 16, I hooked a twenty-inch that gave me a fight I can still remember to this day. North and south of that bridge, anglers thin out, but the fish don’t, and a well-placed caddis or dun will reward you again and again, if you’re willing to walk a mile or two on the dirt roads of the State Forest. 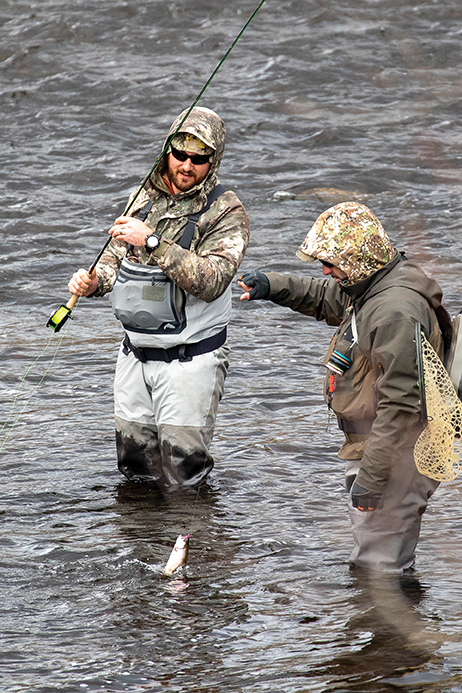 In Massachusetts, the riches increase rather than decrease, as the watershed spreads out into the Berkshires and the hills around the Quabbin Reservoir. The tail-water fishery of the Swift River where it bursts out of the Quabbin, is a worthy destination for anglers from nearby Springfield, but the farther you get from that population center, the more you will be rewarded. North of the Quabbin, Miller’s River has some gorgeous urban spots underneath brick factories, and along Route 2, ignored by those anglers who want a “pure” experience. For those who do, the western feeders of the Connecticut are a dream. The three branches of the Westfield River are federally designated wild and scenic, and though mostly accessible by car, all have long stretches where you will not see another rod.

They are matched, and surpassed, by the magnificent Deerfield River. Rising out of the ponds and springs of Southern Vermont, the Deerfield cascades into northwest Massachusetts, creating yet another of the watershed’s perfect fly-fishing paradises. Angler and Middlebury College professor Matthew Dickerson, author of books like Downstream and The Voices of Rivers, once caught fifteen rainbows and brown trout in the Zoar Gap near the state border. “It felt like I got four rivers for the price of one,” he wrote, praising the knowledge of local guide Tom Harrison. “On that fall day, the stream with all its varied parts, like a story, changing from mile to mile and even minute to minute, began to fit together in a fluid whole. And I was fortunate enough to get a glimpse of a couple parts of the tale.”

Another part of that tale starts farther upriver in Vermont. Dickerson has also fished some of the smaller tributaries and branches in Green Mountain National Forest, where the river (there just a brook) spills off the south and west slopes of Stratton Mountain. There it is the territory of palm-sized wild brookies, and you can still stumble on an unspoiled beaver dam. Farther north in Dickerson’s home state, the 57-mile White River is dam-free and part of the Atlantic Salmon Restoration Project. This central Vermont tributary drains 700 square miles, with four large branches practically empty of anglers, all of whom seem unable or unwilling to cross the Green Mountains from the more famous Battenkill. Because there are no dams, the river’s hatches are more unpredictable, and many stretches have relatively low productivity, but this only adds to the challenge and excitement, as you try to puzzle through the Quill Gordons and Little Green Stones in your fly-box. 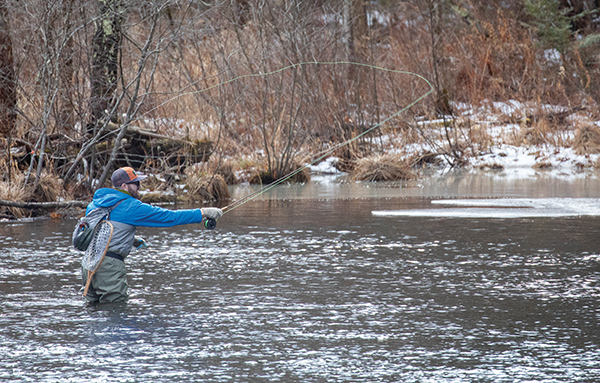 Those who like bigger, slower rivers might try the White where it runs south of Sharon, Vermont, and features five-pound bass and enormous brown trout in pools too deep for wading. For a better chance to catch bigger trout, there is also a three-plus-mile long special regulation stretch near Bethel that allows artificial lures only, with a creel limit of 1 and a minimum trout of 18.” But the dozens of tiny feeder streams of the White might even be more rewarding, as you explore shady, stony pools all by yourself, with the only thing to break the silence a native brookie struggling on your line.

Across the border in New Hampshire, the 27-mile, well-managed Sugar River comes out of Lake Sunapee and includes an easily accessible fly-fishing-only stretch in Newport. A heavily-stocked river, the Sugar nearly guarantees catches in spring, and during the summer provides a chance to try out some of the more interesting terrestrials in your fly-box, like ants and beetles. Farther north, another popular spot is the Ammonoosuc, which originates high on the shoulder of Mount Washington and draws anglers from the nearby big hotels, even though it dries up quite a bit during the tourist months of August and September. One wintry May, after hiking out from a snowbound Zealand Falls Hut, I cast my line over the Ammonoosuc River off Route 112, watching snowflakes drifting down from the ramparts of White Mountains while numb fingers fumbled with a blood knot. Though I only hooked one fish, I later felt that I had had one of the best days of my career as an angler. 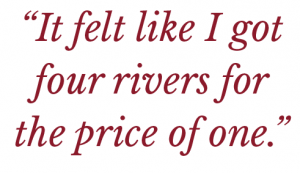 By the time we’re close to the Canadian border, the main cable of the river itself becomes perfectly wadable, flowing out of the icy deeps of the Connecticut Lakes. Within a thirty-mile stretch of cold-water wonderland, there are two stunning fly-fishing-only sections, including the famous “Trophy Stretch” south of Lopstick. A few summers ago, David K. Leff took his twelve-year-old son Josh from their home near the Farmington three-hundred miles north to fish the trophy stretch of the Connecticut, trying to learn its secrets. Moose browsed the sides of the roads, while loons laughed on the misty morning lake. Father and son waded the small pools and pocket water below the Lake Francis dam, then tried the area just by the Pittsburg-Clarksville Covered Bridge where Potash Brook enters. That evening, as the light faded from the sky, Josh caught his first trout on a #16 Adams just upstream from the span. 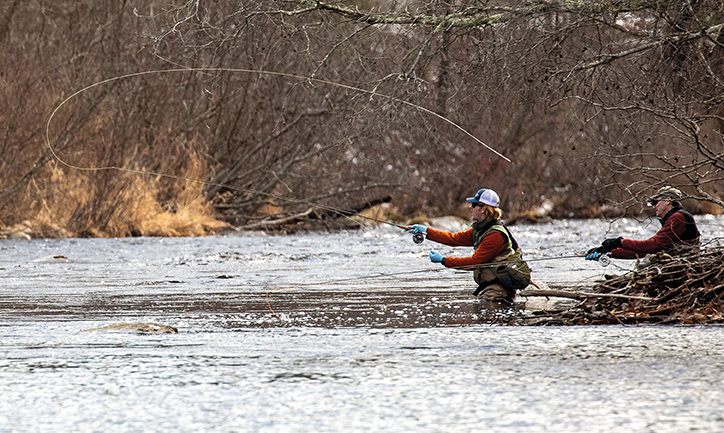 Josh’s eyes were “big and bright” and David’s “heart was pounding” as they shared this special experience, midstream in the headwaters of New England’s greatest river. They are not the only ones. Countless anglers are finding the Connecticut watershed again, and not only human ones. In recent decades, bald eagles have returned to fish here. We might take a cue from their wisdom, and explore the endless miles of fly-fishing from Canada to Long Island Sound. It might only take a lifetime. 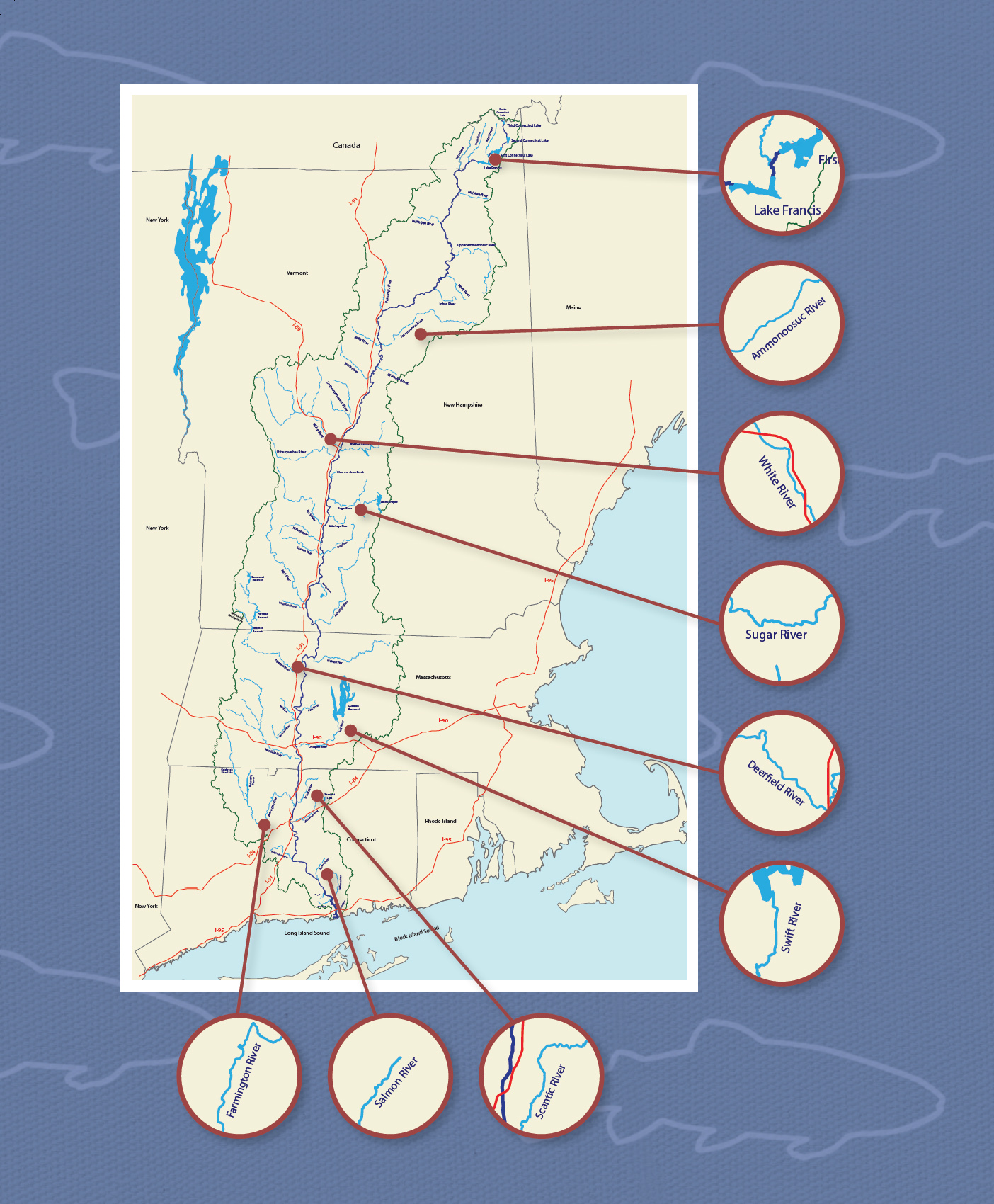