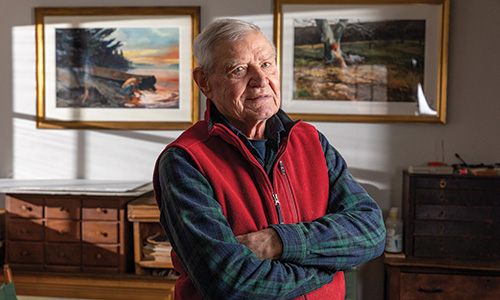 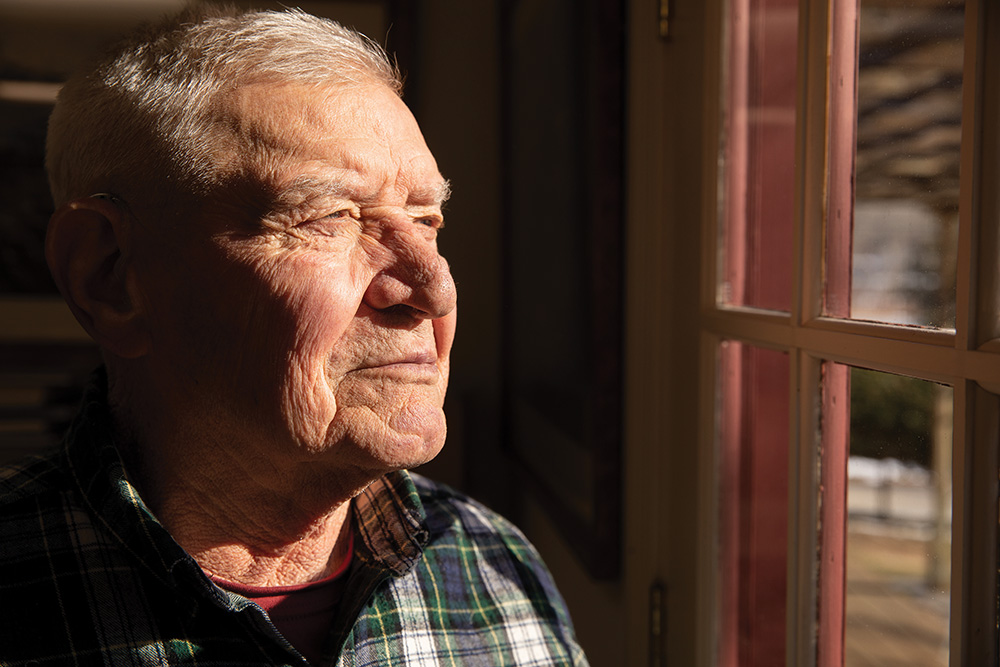 Painter Chet Reneson in his home in Lyme, Connecticut.

At 85 years, Chet Reneson of Lyme, Connecticut, who has for decades perched on the pinnacle of sporting art, is still on his game with more commissions than he can handle. Those in the know about his paintings of hunting, fishing, and nature included in the genre of wildlife art would say it is because of his talent, but Reneson, who has lived most of his life in the Connecticut River’s estuary country, cites an additional reason. “Most of the other top sporting art painters are dead,” he says. 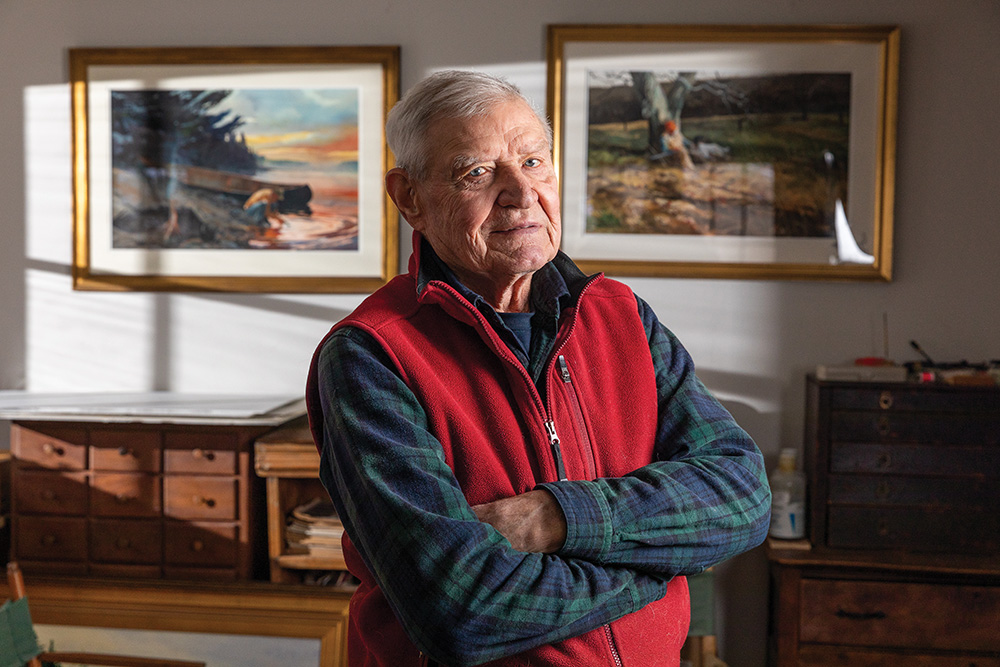 Chet Reneson stands for a portrait in the studio of his home. Hanging in the background are two of his paintings.

To help recruit new talent, Reneson says he prodded the Connecticut Department of Energy and Environmental Conservation to open competition for art used on the state’s waterfowl hunting stamp, which all waterfowl hunters must purchase and carry, to young in-state artists. Starting next year the stamp, which funds conservation and purchase of waterfowl habitat, will feature the winning artwork from the Connecticut Junior Duck Stamp Competition, open to youngsters from kindergarten through high school. 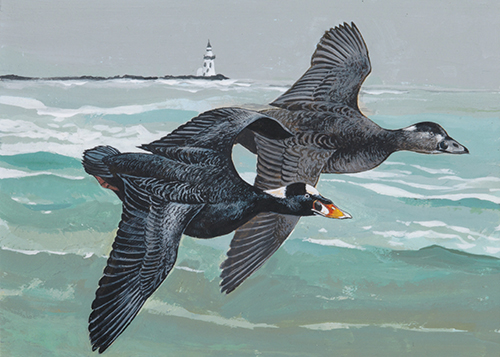 Reneson’s 1962 painting of ducks was selected as the art for the 2018 Connecticut waterfowl hunting stamp. It was the first art by a Connecticut artist to appear on the stamp since the stamp started featuring art in 1993.

The stamp was initiated in 1993 but until Reneson’s own work appeared on it in 2018, no Connecticut artist had won the competition. His selection happened only by chance when a friend saw a small painting in a desk drawer at Reneson’s rambling, 200-year-old home. Reneson had submitted it, unsuccessfully, to the federal waterfowl stamp competition in 1962 shortly after graduating from the University of Hartford Art School, dead broke. At his friend’s suggestion, he entered the old painting in the state contest and won.

The painting shows two surf scoter sea ducks flying over water. Before submitting, he added one addition into the scene, tailoring it for Connecticut. On the horizon behind the ducks he painted the Old Saybrook breakwater and lighthouse at the mouth of the Connecticut River. 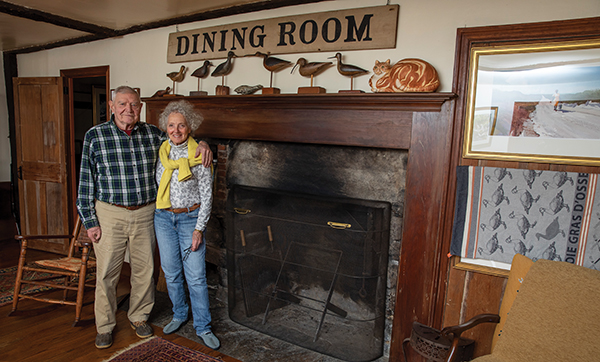 Reneson and his wife, Penny, stand in the dining room of the home.

It was fitting. Of all the places he has visited and painted, says Reneson, his life and work have been shaped most by the estuary of the Connecticut. Reneson paints from experience and his leathery face, etched by the outdoors, reflects it. It has been burned by sun glaring off Bahamian bonefish flats, chilled by the clinging fog of Scotland’s moors, and the surf smashing Maine’s coast—and, most importantly—blown by the cut of winter wind whipping the spartina cordgrass of the Great Island marsh in the heart of the Connecticut’s estuary. Life on the River molded his feeling for wildlife and the outdoors.

Most of his adult life has been on the shores of the estuary, which early in his marriage even provided him and his wife Penny with fish and game to eat. It also landed him his first job, illustrating the innards of aircraft engines at Pratt & Whitney in Middletown, Connecticut. Fresh out of school and scratching out a living at a chicken farm, he had loaded a few cork duck decoys he had made into his boat at Lord Cove in Old Lyme when another duck hunter approached to admire them. To shorten the story, the man’s father was an executive at the aerospace company and hooked up Reneson with a job.

The work paid bills but was not satisfying. He took a risk and started freelancing wildlife illustrations for publishers in New York City. Nervously, he toted some of his work into a prestigious Manhattan gallery, the Crossroads of Sport. His genius was recognized and he was on his way.

Reneson’s big break came at a most propitious time the mid-1960s. Sporting and wildlife art boomed as it rode the crest of the surging environmental movement. It was a seller’s market, and sporting art was sucked up by galleries and print houses. Prints became hot items for investors and collectors. Conservation groups, such as Ducks Unlimited and the Connecticut Audubon Society, hooked up with artists to offer their works. Production houses and publishers made millions. Commissions piled up for artists like Reneson. One day, he dropped two paintings at a Manhattan gallery, and went to lunch. When he returned, the paintings were gone. “Where the hell are my paintings?” he growled. “Already sold,” he was told. 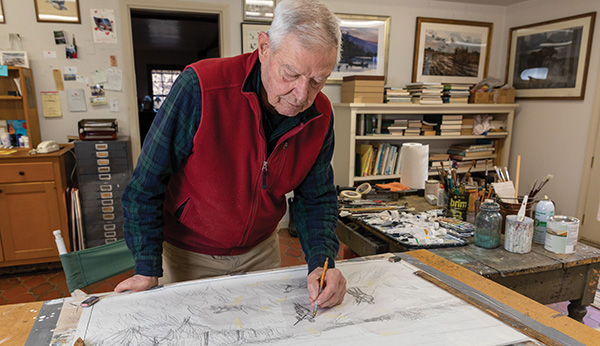 Chet Reneson works on the layout of a commisioned painting in the studio inside his home.

Reneson’s work has been sought by top magazines and featured on covers of Sports Afield, Gray’s Sporting Journal, and Sporting Classics. He has been named Artist of the Year multiple times by Ducks Unlimited, Trout Unlimited, and the Atlantic Salmon Federation. Top galleries feature his work, including The Cooley Gallery of Old Lyme, noted for paintings by American Impressionists and artists from the Hudson River School. Reneson had a one-man show there a year ago and will do another next year. Some artists lose their touch as they age, said gallery owner Jeff Cooley. “Chet gets better as he gets older. He is doing his best work yet.”

Although Cooley has shown some other sporting art in the past, it is not the gallery’s forte. Cooley says Reneson’s work goes beyond the sporting reality. “It is his landscapes,” he says, that make the difference. “Chet has a tremendous sense of color and of nature. His art would be remarkable without a single gun or fly rod in the depiction,” Cooley says.

Reneson does not bluff by painting wildlife and environments he has never seen. “I only paint from experience,” says he, a fact noted by another Connecticut sporting artist, Robert K. Abbett of Brookfield, in the text for a sumptuous picture book, The Watercolors of Chet Reneson (Silver Quill Press 2001). “The art of Chet Reneson is successful for several reasons, only one of them being its grounding in the realities of imagery, of nature, and of personal experience…In sporting art, there is little that can substitute for being there…”

In Reneson’s art, shooters do not just point a shotgun but lean properly into it as they prepare to fire. Ducks setting their wings are positioned correctly into the wind, the direction of which is evident from the bent of vegetation. The foliage around a grouse hunter matches that growing during the legal grouse season, not a time of year when bird hunting would be illegal. The graceful arch of the fly rod lines up perfectly with the fish churning water at canoe side.

Reneson seems to revel in wild weather, especially the cold, as one might expect for someone who characterizes duck hunters, who avoid Great Island once December cold arrives, as “candy asses.” If the man has been shaped by the places he has frequently hunted and fished, so has his painting. The landscapes of his water fowl art are often brooding, sometimes bordering on scary. Looking at his marsh grasses bowed before the winter wind can make one reach for a sweater. When Reneson speckles the air around the grass with snowflakes, it can make you shiver. Most of Reneson’s work has been watercolor, for which the publisher of Wildlife Art magazine has called him a “master.” Today, he paints mostly with acrylics.

Perhaps Reneson’s biggest professional credit is that he makes a good living from his art. It was not always so. Reneson is a son of Connecticut’s land. Born in Cromwell, he grew up on farms in Durham and Colchester, where his family raised ring-necked pheasants for game preserves. He worked hard as a boy, and painting, he says, “was a release.” By the time he started driving a tractor at 10 years, he had already started painting waterfowl and deer; a painting of a great horned owl done at age 12 hangs in his home. “Great owls killed our pheasants,” he recalls. His equipment was rudimentary; early paintings were on Masonite. He carried his portfolio around wrapped in baling twine. 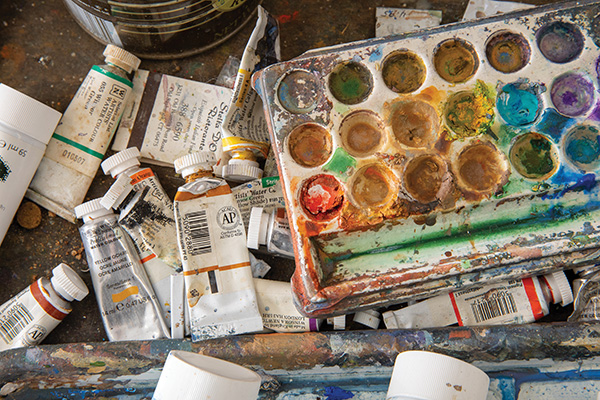 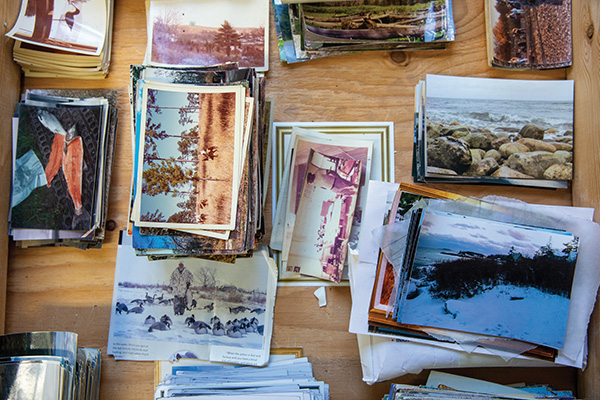 Stacks of photographs from Reneson's travels aroudn the world. He occasionally uses them for inspiration in his paintings. 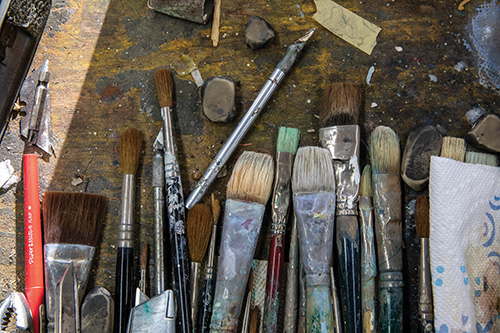 Brushes and tools in Reneson's studio.

Like any pro, says Reneson, “I paint for money.” Truth told—he readily admits it—the business end of his operation is handled by his wife, Penny. She started the advertising, the website, the print sales, and just about everything else pertaining to the business end.

“This is where she works,” says Reneson, almost reverently, pointing to a desk in their home—which also contains his studio—appropriately with no frills, and low-tech. If you e-mail him, Penny answers. “Chet doesn’t ‘do’ computers,” she explains. That figures. Penny, by the way, has not been a stay-at-home spouse while her husband jaunts off to hunt and fish. She has been with him on the bonefish flats, canoeing the backwaters of Maine, and just about everywhere else he has gone.

Penny recognizes that painting is life to her husband. “…He does what he does and gets paid for it,” says Penny. In a world of wannabes, the mark of a professional artist is the ability to earn enough to work at what one loves. Earning power divides a vocation from an avocation, amateur from pro.

It is possible that paint, not blood, runs through Reneson’s veins. “Would Chet paint if he was independently wealthy?” asks Penny rhetorically. “It is my belief that he would. It is something that he was born with and he is driven to do it. He sometimes talks about retiring, but I don’t think that he could.”