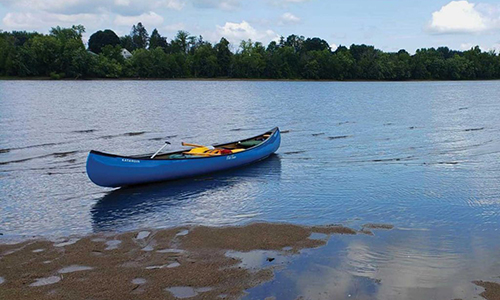 Text and photos by Emily Dixon 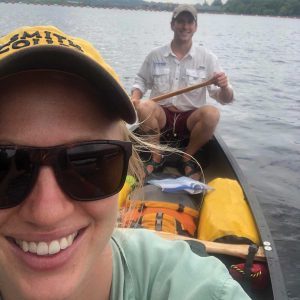 I know the mouth of the Connecticut River well. My commute between my parents’ houses was faster by water than car, crossing the channel from North Cove in Essex to head to the protected Lord’s Cove in Old Lyme. I grew up with osprey squawks, an occasional swimming deer, and telling the tide by the directions of the boats in the mooring fields. Years later at Smith College, I often saw the Connecticut River while biking, watching the ice flows in February with huge tree trunks fouling the pilings in April. I often thought about paddling my way downstream from college to home. There was never enough time until, five years later, the trip finally materialized.

This past summer, I canoed from Northampton, Massachusetts, to Long Island Sound with my partner, Connor O’Neill. We used The Connecticut River Boating Guide: Source to Sea by John Sinton, Elizabeth Farnsworth, and Wendy Sinton for our route and daily map. It fit perfectly into a gallon Ziploc and was perched on a dry bag throughout the trip. The trip was 92.5 miles, and we added a few slight detours to round it up to a 100 miler. This is my diary: 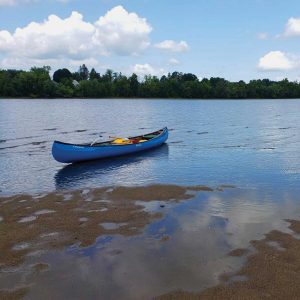 Elwell Recreation Area in Northampton, Massachusetts, in our trusty, blue 16’ Old Town fiberglass canoe, Mudbug, a common nickname for our favorite seafood snack, crawfish. After triple checking gear and finding the 35 perfect stow positions for various dry bags, we set off. With all our food and 20 liters of water, the gunnels seemed dangerously close to the wave tops at the protected boat launch. After a beautiful and uneventful short paddle, we arrived at Brunelle’s Marina.

Initially, excited to read in the guide books about the power company providing a shuttle service to paddlers to circumvent the Holyoke Dam. When our ride came in the morning, we chatted and decided that we would regret not doing the portage on foot. We pulled out at South Hadley Canoe Club and carried all of our equipment the one mile through Hadley to launch at Beachgrounds Park. While resting our tired backs at the South Hadley Public Library, we were offered a ride, which we also turned down. A little stubbornness got us a long way on this portage. The canoe over our heads was light as a feather compared to the heavy dry bags digging into our shoulders. After launching in the 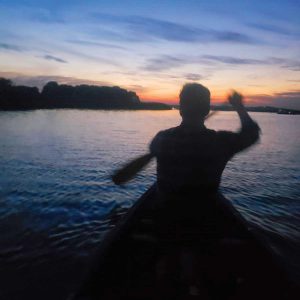 shallow water below the dam, we had a quick paddle to the community rowing and paddling organization, Holyoke Rows, to camp for the night. This was well timed because big thunderstorms rolled through that afternoon. We set up our tent on the club’s open porch and rode out the storms by cooking good food and napping in the hammock.

Waking up to a clear sky, we launched Mudbug under the watchful eye of a beaver building his home under the floating dock. North of Springfield, Massachusetts, we spotted three large creatures hopping on the west bank of the River. As we paddled closer, we realized, to our delight, that the creatures were actually a family of bald eagles. We slipped by silently in our canoe, mesmerized by their beauty, size, and comedic antics. As we approached the Route I-91 bridge, we stuck to the east bank of the River 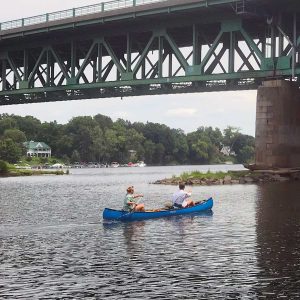 knowing the breached dam, and subsequently the Enfield rapids, were ahead. The water picked up speed making its way around the initial structure of the old dam. Thinking we were safely below the dam and had avoided a second portage, we celebrated and moved confidently back into the middle of the River. Our revery was interrupted by the increasing low roar of falling water. We paddled furiously back to the safety of the east bank in time to navigate Mudbug over an eight inch drop. We breathed a sigh of relief, knowing the breached dam was now actually behind us; ahead lay King’s Island.

The campsite was located on the northeast side of the island. After setting up camp on one of the two tent platforms constructed with the help of the sports retailer, REI, we paddled to some smaller islands located close by. The smaller islands provided a great place to float in the current and drip dry in the setting sun. 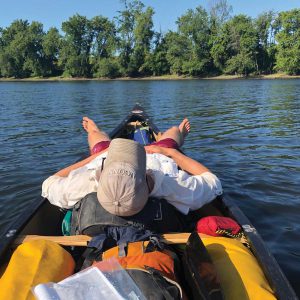 As we made our way south, the River widened; the water was fast and crystal clear. We paddled atop fields of eelgrass and hidden fish darting between the blades. Making our way closer and closer to Hartford, we decided to take a brief detour up the Farmington River for a midday hot dog at Bart’s. After struggling against the current, a hot dog loaded with sauerkraut and a tall root beer were a welcomed prize. We set up camp on an unnamed island located north of the Bissell Bridge. The island became quite busy with people fishing, jet skiers, and kids running around, all enjoying the River at sunset.

We started out early knowing we had many miles ahead of us. We were joined by the Hartford Riverfront Rowing Club as they rowed north and we paddled south. Filling up with potable water at the Hartford boat house, we stopped and enjoyed a breakfast snack with bustling Hartford in the background. South of Hartford, the scenery became more industrial with infrastructure for old barge traffic and a faint odor from local landfills. Reaching Crows Point, near the Glastonbury Boathouse, the River was wild once again, hosting lots of enthusiastic water skiers. By the time we reached River Highlands we were exhausted. After a lovely dinner on a riverside picnic table, we fell asleep while several owls hooted nearby. 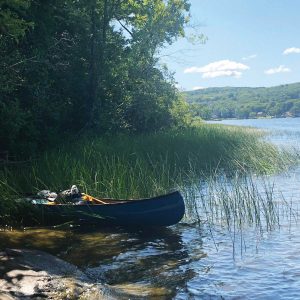 Setting off in early morning fog, we were accompanied by great blue herons hunting for breakfast along the bank. They leapfrogged downriver as we glided past. As the day progressed and the River got deeper and wider, motorboat and jet ski traffic increased. We tied up our boat at the Blue Oar in Haddam, Connecticut, for a well earned hamburger.
Our boat was the smallest and dirtiest on the dock. As we entered the restaurant, it became clear by our appearance (and our smell) that we had been traveling for some time.

After waving goodbye, we continued past the Goodspeed Opera House on the eastern shore. The entrance to Chapman Pond was barely discernible behind a group of small islands covered by small motorboats. As we passed through the narrow entrance, the pond opened up before us. We noticed a small break in the bank’s brush indicating a campsite nearby. A short walk up the hill were two tent platforms in an open wooded area with views of the pond below. After setting up camp, we paddled back out for a refreshing River swim and boat wash. A slight breeze at the site made for a wonderfully bug free night. 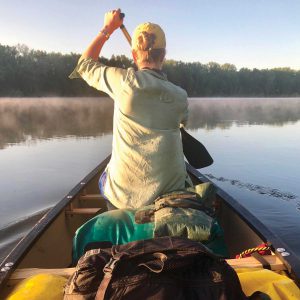 Waking up with several people fishing in the pond, we made our way south observing many osprey along the way. As we neared Gillette Castle, the ferry was dutifully making its trips back and forth across the River amongst fish leaping out of the water. We turned east into Selden Creek, following the marshy waters and enjoying the peaceful respite from motorboat wakes. A brief stop in downtown Essex, where we fueled on our first coffee in a week, gave us the push we needed to make it to the sound. We battled large waves near the gas dock on the east bank at the railroad bridge before tucking into the end of the Lieutenant River for the final stretch through the marsh creeks leading to the Sound. We passed crabbers and paddle boarders along the twists and turns before the current picked up and soon we were in the Sound. We were amazed at how shallow the water was at Griswold Point and ceremoniously dipped our last smoked pepperoni stick into the water for a celebratory bite, our journey having come to a close.
…………………………………………………… 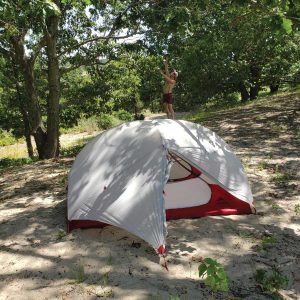 The paddle down the River displayed the wide range of life the River supports, from abundant wildlife to the industrial Springfield skyline to happy shrieks emanating from the rides at Six Flags. This trip would not have been possible without the help and support of our parents. Collectively, they took care of our dog, drove us to our launch, stored our gear, and towed us back from the Sound. The food was plentiful from homemade cookies to mid-trip burgers, and the finale on the grill; we are grateful.