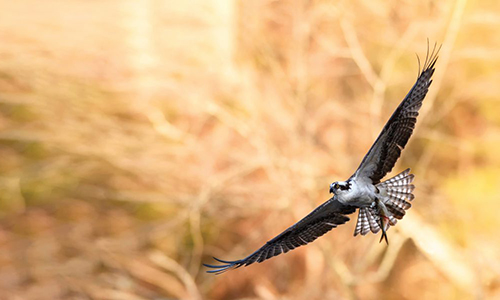 In Awe of the Osprey

sharing the spectacle with the next generation 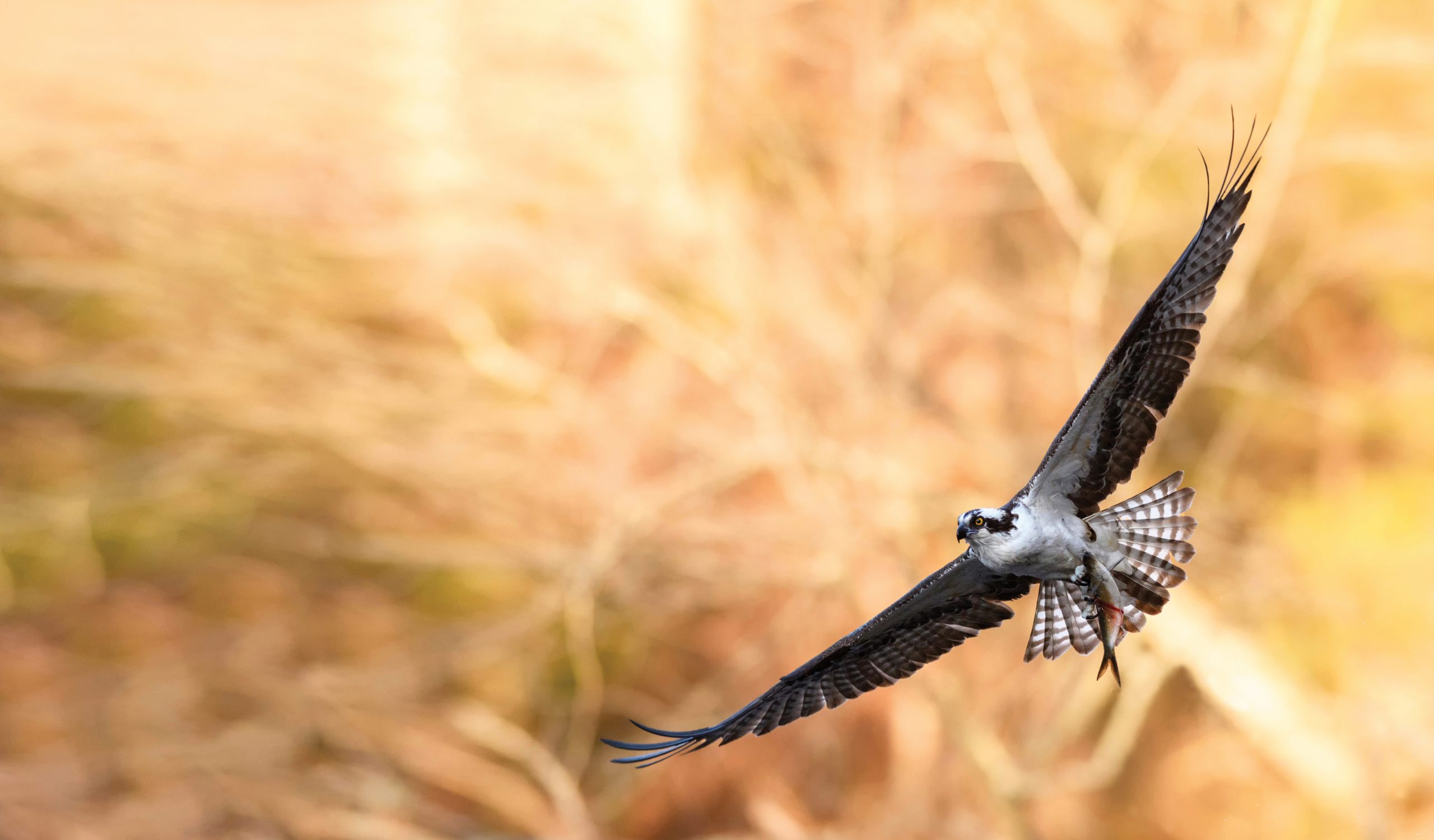 During the month of March, the onset of spring in New England is revealed by the arrival of a conspicuous coastal and estuarine raptor—the Osprey. It may be blowing hard on Connecticut salt marshes with temperatures hovering in the 40s, but for Osprey, this time is ripe for reproduction.

Just when winter is feeling too long, and cooped up New Englanders are suffering from weather-induced grouchiness, this magnificent flyer returns from South America to dazzle us. The return of the Osprey and everything about the subsequent nesting season is “bird TV.” Ospreys put on a show on the sometimes snowy March shoreline as we await the release of the brutal grip of winter.

If you are fortunate enough to care for a child or a grandchild, the possibility of a late March Osprey sighting is an excuse for a foray outdoors, to observe the shift in seasons and to witness the wonder of nature. Ospreys can be helpful as nature’s gateway bird to some 2nd or 3rd generational fun outside. Ospreys are low hanging fruit for environmental education. Ospreys are large and exciting birds. They are often heard before seen. While they perform their “sky dance” flights they sound off with bracing, high-pitched calls to announce themselves to intruders or to garner attention in courtship. In Ospreyspeak, they are announcing, “See me here, this is my nest, and she is my mate.”

Ospreys mate for life but migrate and spend their winter “vacation” separately. During the breeding season, the males rise up some 30 feet above the water, hover in place for better focus on the fish below, and perform spectacular plunge dives 8–10 times a day, to secure enough fish for themselves, their female mates, and eventually, their young. Females do not catch any fish for nearly 5 months while they are in their nesting and motherhood phase. Ospreys coexist with humans unusually easily, preferring to erect their impressive stick nests on structures like man-made platforms, ship masts, electrical poles, cell towers, and bell buoys. The nesting cycle can be witnessed in full view from the shoreline or from a boat. Taking time to sit on the shoreline and simply observe the ancestral benchmarks of fish hawk reproduction is a treat for any age.

With a child at your side, there are many entry points to begin the process of inquiry and excitement. Adults can set the stage for anticipation. Guess the date of the first Osprey sighting. Hint: male birds almost always return first to Connecticut coastal marshes March 19–24. That is a good time to set up an Osprey calendar. Become a nature detective and witness nest site selection, courtship, nest building, incubation, chick emergence, fledging, and migration. Observe it, track it and have fun! Identify one or more nest platforms to adopt and return to as often as possible to take mental or real field notes with photography, drawings, and written descriptions of breeding bird behavior. It helps that Ospreys prefer to remain loyal to their particular nest year after year, which has the advantage that the work of nest building is already accomplished but with considerable repair work often necessary after the ravages of winter.

When the females return a few days later, suddenly there will be two active birds virtually tethered to the platform. For the most part, the soon-to-be Dad birds will be busy gathering hefty sticks, one at time, to build or enhance their nests. Children can scatter large sticks on the ground nearby for the Osprey to snatch up on their homebuilding forays. It won’t be long before egg-laying occurs in early May and two to three chicks pop up above the mass of woven sticks five weeks later. Hunting and fish delivery activity are now in full force with downy chicks ravenous for protein. After about 50 days of watching and waiting in the nest, young Ospreys with sturdier feathers are nourished enough with a diet of daily fish that they attempt their first awkward flights, just like children with their first steps. Once the young are independent and airborne, Mom Osprey leaves the roost to regain strength and head south. Meanwhile, Dad Osprey continues his fish forays back and forth from the nest to supplement the diet of his fledglings. Neither parent teaches their offspring to hunt fish, which becomes an inefficient trial and error survival test for each fledgling. By early September, our Connecticut River Ospreys start heading south with the first-year birds trailing in the subsequent weeks. It is probable that this family group will never be united again. They disperse on their own and fly solo over 3,000 miles south on an epic and arduous monthlong migration. They have strong memories for the visual cues of stopover feeding areas and usually forage along the Atlantic coastline, Haiti, and Cuba before ultimately reaching South America, often as far as the Amazon Basin. Satellite transmitters placed on migrating Ospreys show that they navigate these long distances with uncanny precision, especially when travelling over open water like the Caribbean Sea. They never rest on open water, perhaps orienting to varying intensities of earth’s magnetic fields. Scientists also project that Ospreys use the position of the sun and stars as navigational aids.

Observing Osprey breeding season events from chilly March until balmy September is to witness about as clearly as humanly possible, the primordial cycle of life, as seen through the lens of an iconic and dramatic estuary bird. Happy Osprey-ing!

Eleanor Robinson grew up on the shores of Long Island Sound in the neighborhood of the Cold Spring Harbor Biological Laboratory and was indelibly influenced by the nearby estuary and sand spit as well as the lectures and programs of lab scientists and educators.

Eleanor earned a Master’s degree in Science Journalism and a graduate certificate in nonprofit management. She has worked as a teacher and writer for Tabor Academy, the Massachusetts Audubon Society, the Denison Pequot Nature Center, and the Science Center of Eastern Connecticut. Her most recent position was that of founding director of Connecticut Audubon’s Roger Tory Peterson Estuary Center serving Southeastern Connecticut and focused on the Connecticut River Estuary.

Some Osprey trivia to share at strategic times with a young one at your side:

♦ Osprey females are significantly larger than males.
♦ Ospreys are the only raptor that feed completely on a diet of live fish.
♦ Ospreys mate for life and return to their nest site year after year
♦ Ospreys are a global species and nest from Australia to Japan, Europe to Canada and the USA
♦ Ospreys are one of the few large birds that hover
♦ Ospreys have naked legs and especially long, curved and sharp talons. The bottom of their feet are covered with rough spines—all adaptations for seizing fish.
♦ Osprey adult birds have a yellow iris. Younger birds  have orange-red eyes.

P.S. For more information and enjoyment, learn more through the Connecticut Audubon Society Osprey Nation program. View the live stream Osprey Nation “Osprey cam” on the nest. Maybe you and your family members will be motivated to become official Connecticut Audubon Osprey Stewards. Check out the migratory routes of individual Ospreys equipped with transmitters and tracked by satellite on Rob Bierregaard’s website ospreytrax.com and described in his children’s book, Belle’s Journey. Also recommended is the recently published book of Dr. Alan Poole, Ospreys, the Revival of a Global Raptor.