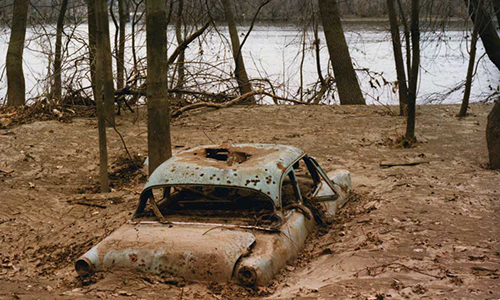 Cleaning up the Connecticut River JUNK

Confronting an Ongoing Challenge
Part I of River Cleanup Series 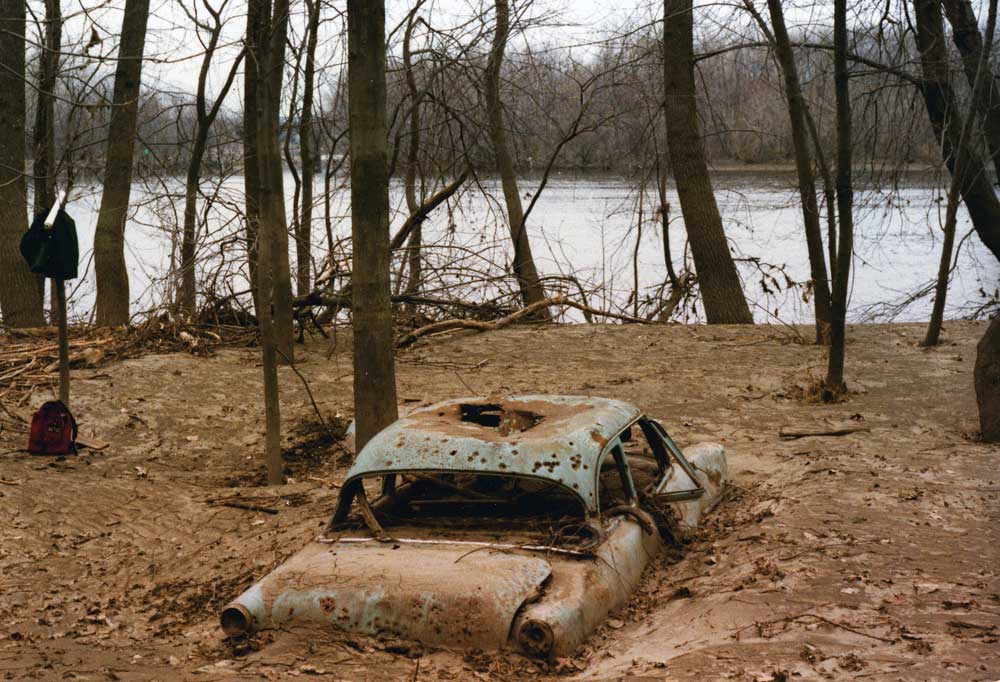 Following a recent major storm, a 500-gallon propane tank floated down the Connecticut River and mushed into the sand just north of Calves Island in Old Lyme, Connecticut. It arrived at high tide and was stuck there for some days. People who ventured near departed quickly after getting a whiff of the propane gas leaking from the tank. A police boat approached the itinerant tank and backed off. An inflatable fireboat came, sniffed, and also backed off. Finally, experts in handling such matters snared the tank and hauled it away.

“White River Junction” had been stenciled on the tank’s side in large block letters. There are a dozen dams between White River Junction, Vermont, and Old Lyme, Connecticut. Had this tank made its way over these dams, bouncing and bobbing the 187 miles almost to the River’s mouth? Someone who might have known the answer is David Wordell. As a young man, Wordell had navigated the Connecticut River in a small boat in August 1953, powered by a 5 HP Scott-Atwater outboard on a five-day round trip from Essex, Connecticut, to Holyoke, Massachusetts. Since then, Mr. Wordell has spent over 50 years boating and exploring every tributary of the beautiful Connecticut River as far north as Hadley, Massachusetts.

In 1968, David, an officer of the Southeastern Connecticut Regional Planning Agency, was appointed as their representative to the newly created Eastern Connecticut Resource Conservation and Development Area, Inc., which was nationally sponsored by the US Soil Conservation & Stabilization Service, a division of the US Department of Agriculture. In 1970, he was elected SCRPA’s president, serving until 1984. 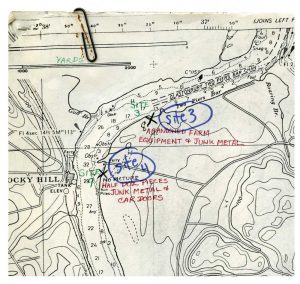 A marine chart used by Wordell to record dumpsites along the river. 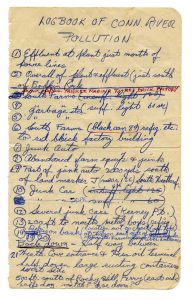 During the summer of 1981, David and his childhood exploring friend, James Bullock, traveled once again by boat to Wethersfield (CT) Cove. On marine charts, they recorded over a dozen dump sites polluting the water of this beautiful scenic River. Convincing Eastern Connecticut RC&D to take on this lofty, multi-year project, Wordell conceived and orchestrated a clean-up of the dumpsites that were unattractive and leeching petrochemicals and other contaminants into the River. He wrote letters to the mayor or selectman of every town that had junk on the River’s banks and to companies that were contributing to the mess. Boy Scouts volunteered to clean up 400 acres along the Glastonbury shoreline filling 5 large dump trucks with debris.

Wordell enlisted the support of the Soil Conservation & Stabilization Service. He testified before both houses of Congress. He took title to over 2 dozen junk cars, cars that had been abandoned, even some that had been ditched during prohibition (VIN numbers, Vehicle Identification Numbers, had not yet been implemented) in order to turn them over to a recycling center. He wrote homeowners seeking permission to remove junk from their riverside property. He even persuaded the Connecticut National Guard to bring their large equipment to remove many old, half-buried automobiles. Some clean-up efforts required use of the US Army’s 16-wheel drive vehicles to avoid getting stuck on the sandy beach. 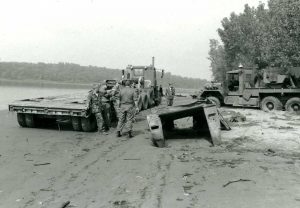 In 1982, Mr. Wordell helped to establish the New England Resource, Conservation & Development Council and became its 1st president. Having helped clean up the banks of the River in Connecticut, he then influenced the RC&D Councils bordering the rest of the 410-mile Connecticut River in Massachusetts, Vermont, and New Hampshire to do the same, which took another two years to accomplish.

Mr. Wordell was the recipient of the Governor’s Distinguished Service Award, given in January of 1984, honoring his service and achievement in the preservation of the Connecticut River and his contributions to the RC&D.

David Wordell is a living testament to what one determined, dedicated individual can do in his or her spare time. At the time, Wordell was teaching mathematics at a regional middle school. Previously, he had been an engineer perfecting the top speeds of the first atom-powered submarines at General Dynamics’ Electric Boat Division in Groton, Connecticut. Today, he and his wife, Lois, manage a small farm in Salem, Connecticut, that is home to their registered Haflinger horses and Romney sheep; their farm also houses a museum of antique carriages and sleighs restored to mint condition (www.ransomfarm.com). 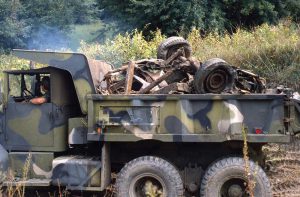 A US Army truck hauls away an old automobile.

Ed Note: This is the first of a multi-part series dealing with the cleanup of the Connecticut River, especially the actions resulting from the Clean Water Act of 1972. This cleanup of chemicals, industrial waste, water treatment runoff, and other pollutants is a remarkable story of what is possible when confronting an ongoing challenge. It is also a story of how vigilance and effort today can maintain what’s good,  improve what needs improving, and open the doors for thousands more to enjoy the natural wonders of this worthy River.