Bald Eagles of the Connecticut River 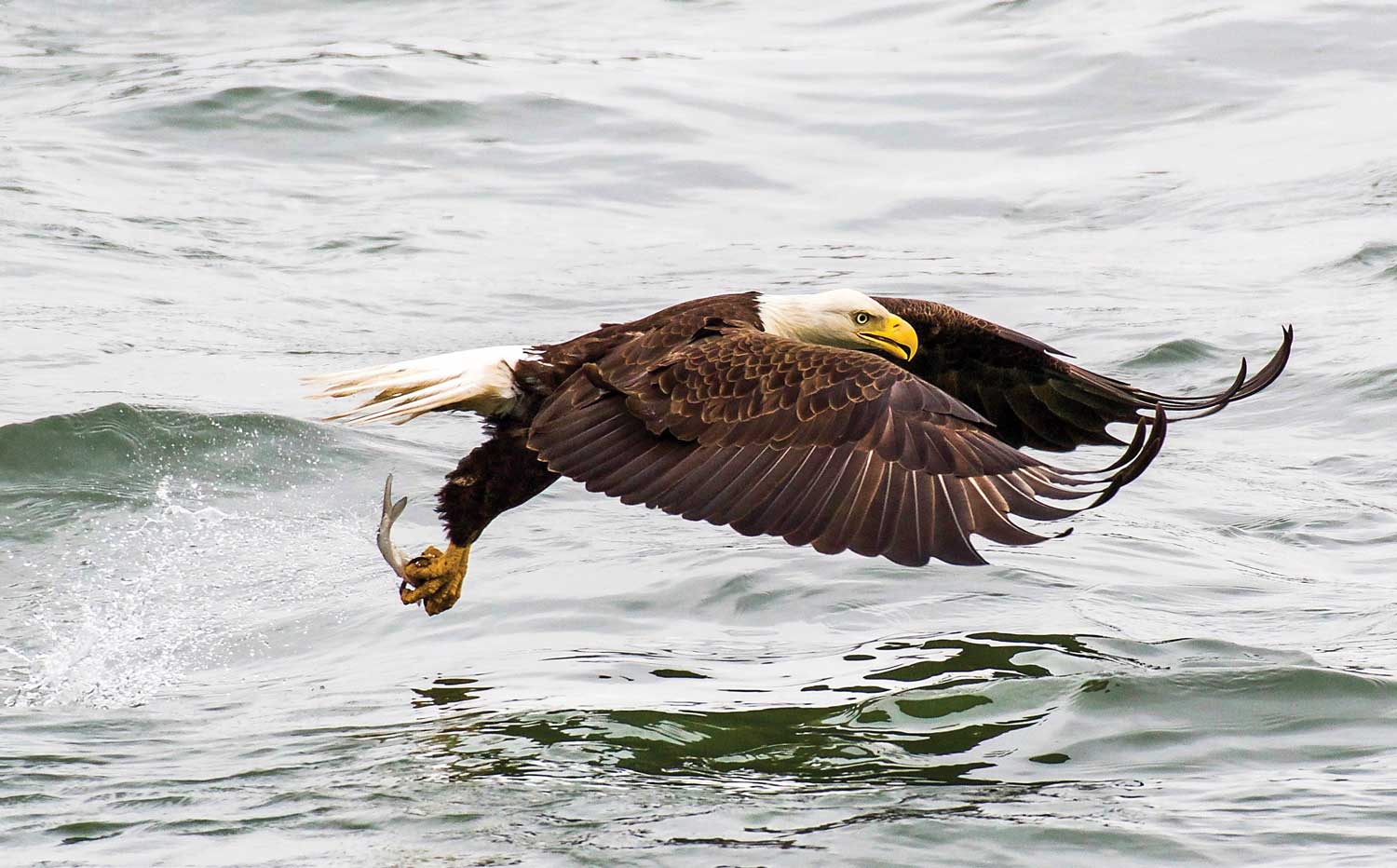 Dead drifting my canoe along a stretch of the upper Connecticut River a few miles upstream of the Wilder Dam, a flash of white against the dark green pine background revealed the perching spot of an adult Bald Eagle. I had been receiving credible reports of a pair of eagles in the area and wanted to see if I could confirm a nest or at least a territorial pair. Remaining motionless for fear of flushing the bird, I waited in hopes it might reveal a second adult or even a nest. Eagle nests are unusually difficult to spot by themselves, despite measuring as much as six feet in diameter and weighing several hundred pounds.

The upstream breeze counteracted the River’s current allowing me to remain in place for nearly an hour. A second bird never appeared and whether the eagle decided I wasn’t worth the risk of remaining, or it was hungry, or simply wanted to see more of the River, it flew off to the north. With a mighty push of its legs, shaking the pine bough as it released its grip, and a few deep powerful strokes of its six-foot wingspan, the eagle was soon out of sight. Though I had seen many eagles over the years, my feelings of awe and inspiration were just as profound as my first encounter so many years ago. It is no wonder the peoples of the Wampanoag, Pequot, Abenaki, and Quinnipiac, were among the many first Nations to revere the Bald Eagle and place them highly within their tribal rituals and customs.

Through public awareness and laws,
habitat quality steadily improved to the
point where eagles could find suitable
nesting and feeding habitat.

Today’s eagle population is a different story. There are an estimated 10,000 nesting pairs in the 48 lower states including at least 50 pairs in the Connecticut River basin. Through public awareness and laws such as the Migratory Bird Treaty ACT (1918), the Bald and Golden Eagle Protection Act (1940), the Clean Waters Act (1972), and the Endangered Species Act (1973), habitat quality steadily improved to the point where eagles could find suitable nesting and feeding habitat. These actions and the banning of DDT in 1972 allowed for the growth and resurgence of Bald Eagles throughout the land. So well has the eagle population recovered that it was removed from the federal endangered species list in 2007. This success story is being repeated in the Connecticut River Basin, too.

The lower part of the River was first to experience the eagle’s return. First to have eagles disappear from the state, Massachusetts last recorded nesting eagles in Sandwich in 1905. But from 1982 to 1988 the state undertook an aggressive effort to reestablish a nesting population by importing orphaned eagle chicks from the Great Lakes region of Michigan and neighboring Canada. The transplanting work centered on the Quabbin Reservoir where, during the six-year reintroduction, 41 eaglets were raised to adulthood, and by 1988, Massachusetts had their first nesting eagles in 83 years. Success at Quabbin extended beyond its borders to include 11 pairs along the Connecticut River by 2018. Eagles are a regular sight along the River in Massachusetts. Turner’s Falls (Greenfield) and vicinity has proved popular for nesting eagles. So well have the eagles faired in Massachusetts that the state has proposed the species be down-listed from threatened to a species of special concern.

Farther downstream, Bald Eagles have experienced similar success. Sharing the story of the eagle’s perilous decline with the other Connecticut River states, Connecticut was fortunate to retain a modest residual population of wintering eagles along its lengthy Long Island coastline, especially at the mouths of major rivers like the Connecticut. But, in 1992, a pair of eagles successfully reared two chicks in Litchfield County. Since then the state’s eagle population has steadily grown to where the state downlisted the eagle population from endangered to threatened in 2010. Connecticut’s eagle population continues to expand and by 2018, state biologists estimated between 50–55 pairs to be residing in the state. Although winter continues to be the best time to view eagles in towns such Haddam and Essex, tributaries of the Connecticut like the Scantic River in Sommersville and Shenipsit Lake in Ellington also support a feeding habitat and potential nesting territories as well as offer viewing opportunities. 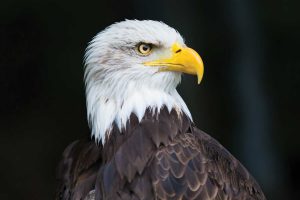 Vermont and New Hampshire have shared a long and interesting history together. Beginning with the fact that, while New Hampshire was one of the original 13 colonies to form the United States, Vermont (once named New Connecticut) remained as an independent nation from 1777 until 1791 when it was admitted to the union as the 14th state. That subtle but important difference is still played out in many things today including Bald Eagle restoration. The difference is due to the fact that 90 percent of the River between the two states belongs to New Hampshire. The eagles, however, don’t know that, nor do they care. Eagles on both sides of the River hunt the River’s tributaries in both states. The only boundary lines they are concerned with are those established by the eagles themselves. Like so much of the habitat in Massachusetts and Connecticut, reforestation along the upper reaches of the River is, once again, an excellent eagle habitat.

Vermont, on the other hand, despite its abundant unoccupied habitat, is one of the last states in the lower 48 to have a nesting pair of Bald Eagles. For reasons known only to the eagles, Vermont’s first modern day nesting pair was discovered in Springfield in 2002. As is often the case with new nesting pairs, success often requires more than one season’s attempt. However, nesting success finally occurred with another pair farther upstream in the town of Concord in 2008, and the Springfield pair was eventually successful. With that, Vermont ended a 60-year absence of the species from the state. As with the other three Connecticut River watershed states, Vermont’s repopulation progressed in fits and starts. Today, record numbers of eagle nests and offspring are being reported each year centered on the state’s three major eagle waterbodies (including Lake Champlain and Lake Memphremagog). Vermont wildlife officials report over 30 nesting pairs in the state with nearly a third of them lining the western shore of the River. However, without those first nests along the Connecticut River, the Bald Eagle’s resurgence would have been delayed even further.

A mere 50 years ago there were an estimated 450 nesting pairs of Bald Eagles in the entire continental United States. Today there are that many in New England alone. Whether by human assisted transplant efforts or through natural expansion of populations along the coast of Maine and Long Island Sound, it is clear the Connecticut River has served as a vital destination for Bald Eagle recovery. With continued habitat protection efforts, vigilance towards environmental toxins, and preventing dilution of important legal protections (e.g. Migratory Bird Treaty Act), the upper limits of Bald Eagle occupation in the basin are yet to be seen. There is still much unoccupied habitat within the River basin. Although Bald Eagles are normally quite wary of people, some have shown more tolerance than others and will likely continue to expand in Connecticut and Massachusetts. With so much unclaimed habitat in New Hampshire and Vermont yet to be spoken for, the future for this magnificent species looks very bright along the 410 miles of the Connecticut River.

JOHN BUCK is a fifth generation Vermonter. John’s interest in the natural world was shaped during his early years in rural Orange County at a time when there were more cows than people.

John received his BS and MS degrees in Wildlife Biology at University of Vermont. Following graduation, John was hired by the Vermont Fish and Wildlife Department as a founding staff member of the Department’s new wildlife habitat management program for private and public lands. Throughout his 39-year career, John managed habitat conservation projects. Until his recent retirement, John focused on threatened and endangered species and conservation of their respective habitats.
In his new career, along with his family, John runs a small organic bird-friendly maple syrup operation in Washington, Vermont. When not working the woods, John sings in the baritone section with the Burlington-based choral group Solaris Vocal Ensemble and with the Vermont Symphony Chorus.

American folklore has it that Benjamin Franklin suggested to the Continental Congress that the Wild Turkey be selected for the national symbol instead of the Bald Eagle. While that suggestion cannot be substantiated, he did offer in a 1784 letter to his daughter that the turkey is a far more respectable bird as indicated by its cunning and bravery. Franklin went on to describe the eagle as having a “low moral character” for its reputation as a thief and a bully. Though the turkey is all of what Benjamin Franklin described it as, I turned my canoe for the Vermont shore thinking how different history might have been had the Founders chosen anything but the Bald Eagle. 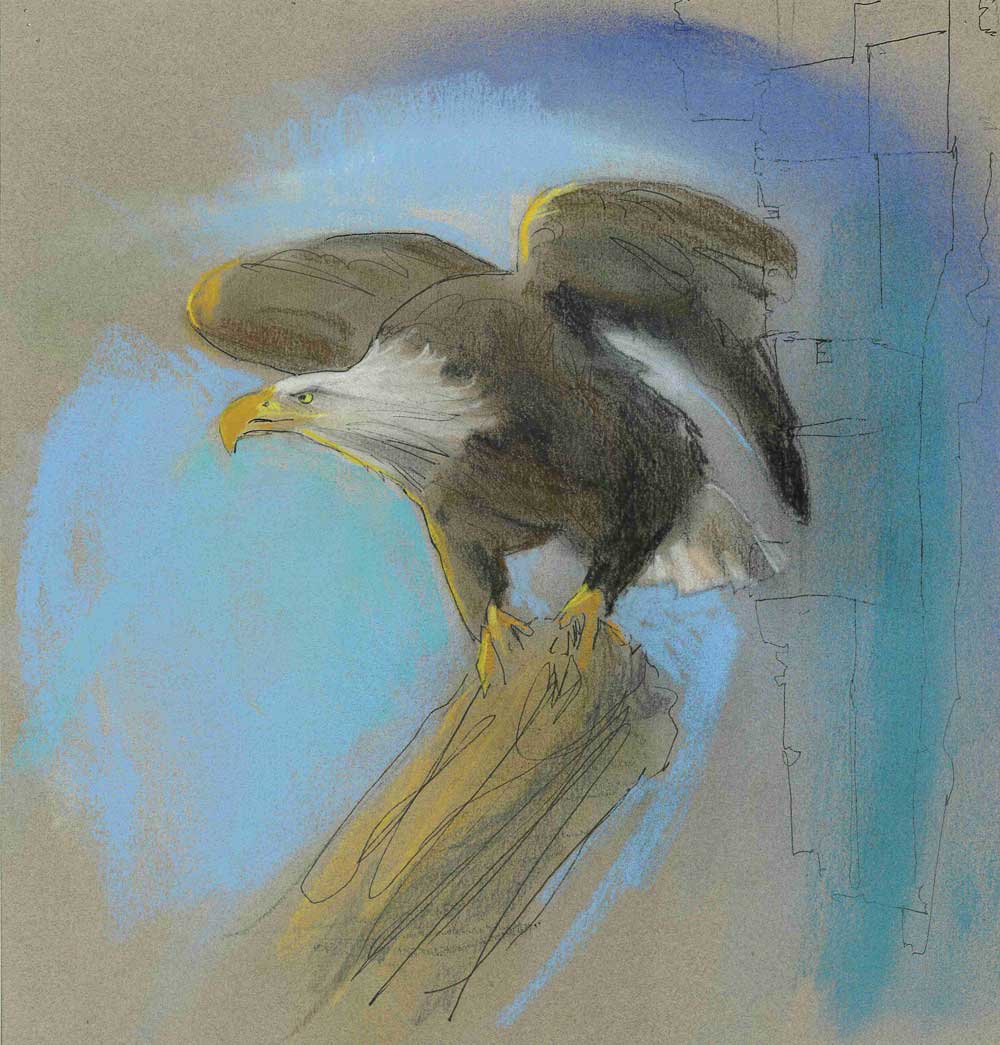