About the Seasonal Ecology Mural 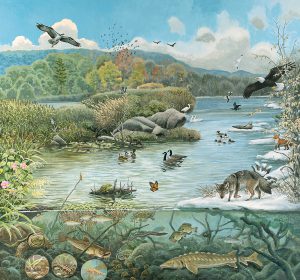 In 2016, the Connecticut River Museum commissioned renowned wildlife artist Mike DiGiorgio to create a painting that would bring to life the tidal marshes of the lower Connecticut River. The painting was photographed by award-winning photographer Jody Dole and enlarged to a mural that is 81 ¼” L x 76” H and installed as a permanent exhibit at the Museum.

The goal of the mural project was to complete the important story of the ecological significance of the river, thereby enhancing school programming and visitor experiences, as well as increasing opportunities to foster environmental scholarship. The mural highlights the seasonality of the ecosystem from left to right, spring to winter. From top to bottom, the mural beautifully highlights the terrestrial landscapes of the forests in the background, the wetland transitional ecosystem, and the foreground aquatic ecosystem. The more commonly known native and invasive flora and fauna are accurately depicted in their ecosystems in the season they are blooming or most active. In spring, migratory birds have arrived on the river and it is common to see Osprey (Pandion haliaetus) hunting or preparing their nests, while the Swamp Rose Mallow (Hibiscus moscheutos L.) is blooming and the American Shad (Alosa sapidissima) is migrating to the streams that they were born in. In the summer months, insects such as the Monarch Butterfly (Danaus plexippus) and Wandering Glider (Pantala flavescens) are as active as the macroinvertebrates in the water and the frogs lingering on the water’s edge. As fall approaches, animals prepare to migrate south, such as the Tree Swallows (Tachycineta bicolor), and the deciduous trees prepare for dormancy but not before they give us a dazzling display of color. Winter on the river is a time when you can see into the forests and catch a glimpse of a coyote (Canis latrans) or red fox (Vulpes vulpes) or look up in amazement to see a Bald Eagle (Haliaeetus leucocephalus) soaring on the wind. This mural captures the essence of the river ecosystem from living to nonliving organisms: the color of the water, the movement of the clouds, and the life cycle of the trees. There are more plants and animals that are well-camouflaged and not easily seen until further investigation. Not to be missed are the invasive species that pop-up in the water such as water chestnut (Trapa natans) and on land such as common reed (Phragmites australis).